LEGO Digital Designer (LDD) is a freeware computer program produced by the Lego Group as a part of LEGO Design byME; it is available for macOS and Windows, and it allows users to build models and scenes using virtual Lego bricks, in a computer-aided design like manner.

What is an LXF file?

A three-dimensional model or scene created by LEGO Digital Designer (LDD); it is saved in a compressed .ZIP format and contains two files: IMAGE100.PNG (a .PNG design preview) and IMAGE100.LXFML (the .LXFML design specified in XML).

What is a scene?

One or more models can be put into a scene, with additional floor and background, one or more light sources and a camera that determines how is the scene is viewed. An .lxf file can contain a single model, but it can also contain many different models, for example a self-build LEGO city.

What is this Guide to LDD?

Rebrickable has about 8,500 MOCs (My Own Creation), new and unique LEGO models designed by fans, which you can build once you own one or more official LEGO sets. The building instructions for these MOCs can come in the form of an .lxf file, and if you have no idea what to do with such a file, this guide is your answer. It will show you how to download and install the LEGO Digital Designer program, how to load the .lxf file, and how view or generate the building guide. 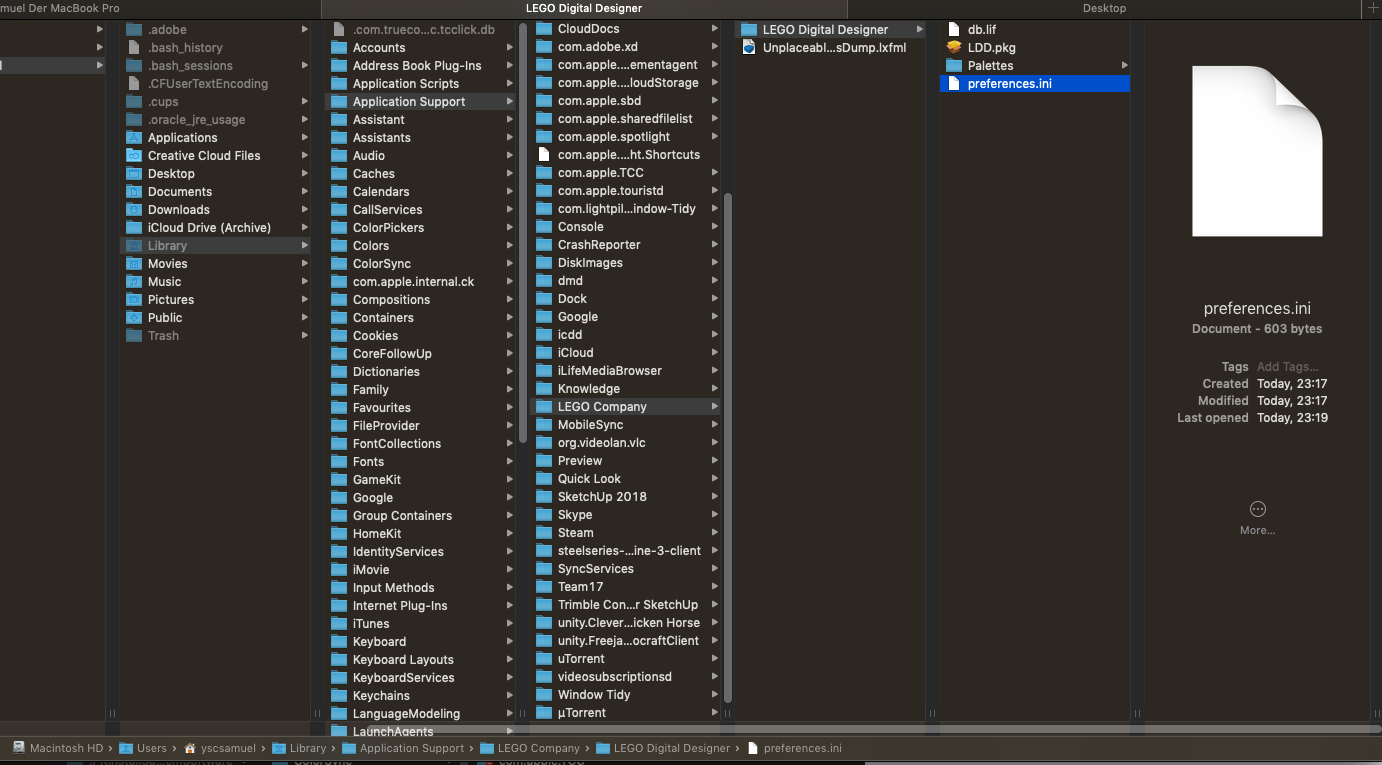 This guide also contains links to useful video tutorials, a tips & tricks section and chapters on how to get help and how to connect LDD to other available programs. The guide is one of a three part series (Guide to LDD, Guide to Stud.io and Guide to Rendering) with a seperate general introduction on Virtual Building.

The latest version of LEGO Digital Designer, 4.3.11, is available at LEGO.com. The program comes in two versions, one for MAC OSx and one for Microsoft Windows. The Windows version will run flawlessly on Linux under Wine. Click on the Download Now button to download the desired version.

Please note the disclaiming below the download buttons: 'The LEGO Group of companies (LEGO) is providing LEGO® Digital Designer (the Software) at no charge. Any commercial use of the software is strictly prohibited.' This prohibition is repeated in the License Agreement included with the software.

For Windows: save and run the installation program setupldd-pc-4_3_11.exe (326.6 MB). The program will then unzip and start the installer. After selecting your language you want make sure that the licence agreement is ticked and then click next. If needed, add a shortcut to the desktop and then click next. You can then select weather you would like to install for the current user or all users. After clicking Install the software will be extracted. Then click Finish to end the installer. You should now have a LEGO Company menu group with LEGO Digital Designer, Safe Mode and two Help options.

For Linux: open the installation program setupldd-pc-4_3_11.exe with the Wine Windows Program Loader. Make sure Wine is fully initialized before starting the installation (run Configure Wine at least once). Then follow the procedure above.

For MAC: save and double-click the installation archive SetupLDD-MAC-4_3_11.zip (323.8 MB). If you get an error message that says the program 'can't be opened because it wasn't downloaded from the Mac App Store,' right-click the downloaded file and select Open. The Mac installation file is named LDD.pkg. Once the installer starts, follow the procedure above.

Each time the program is started, it connects to the Internet to download newly added bricks. The first time after installing the program, this download might take significantly more time. The Menu > Help > About box shows the version number of the latest brick download (Brick Version: 2670).

The opening dialog shows a selection panel on the right with recently used models, an 'Open another file' icon and a 'Free build' icon. LDD models have an .lxf extension. To load an existing model click Open existing file and select the model. The top of the opening dialog contains three tabs, named 'Digital Designer', 'Mindstorms' and 'Digital Designer Extended'. These are themes that determine the contents of the parts library. At any moment, the theme can be changed using Menu > View > New Themes. The default theme, Digital Designer, contains a part library with available colors for each part. More about themes in Tips & Tricks.

LDD follows the common 'left-click is select' convention, while right-click & drag is used to alter the angle of the 3D view. The mouse scroll-wheel is used to zoom in and out. The large arrows against the sides of the 3D view also change the view angle. Besides the bottom arrow there are three smaller icons:

The left of the screen contains the parts library, consisting of 37 part categories. When clicked the category unfolds to show all its parts. Click again to collapse the category and hide its parts. Right-click to select and drag the part to its place. Parts will automatically snap to the grid and connect to other parts.

The menu bar contains common options such as File, Edit, View and Help, as well as a Toolbox menu to select a tools. The default toolset (also available as icons below the menu bar) consists of:

For a more detailed description of camera control, the icon and menu bar, and building tools and palette, see Getting Help.

If you have downloaded an LDD .lxf file for a Rebrickable MOC, and you wish to generate instructions, follow this procedure: 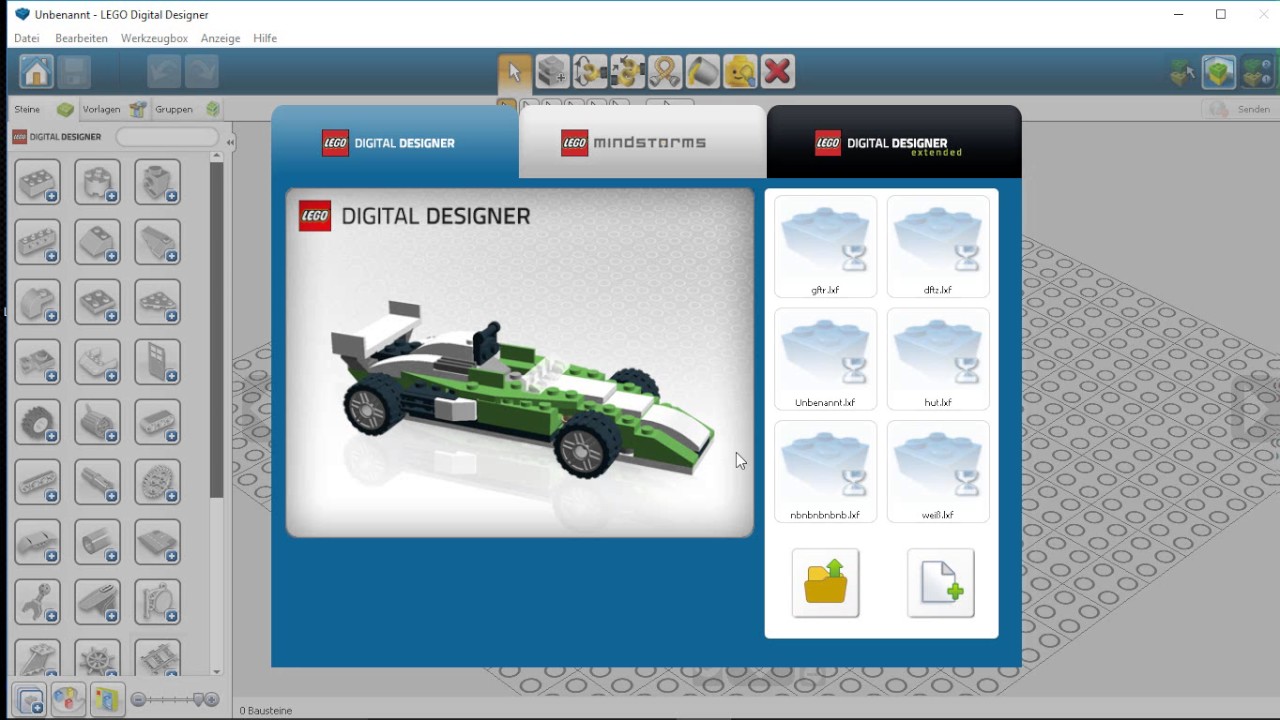 In LDD you can browse through the building proces and actually see where each individual part is placed, as the proces is animated and the parts literally fall down into the model. When generated as a HTML building guide the build is divided into pages, which each page containing upto four parts, which are placed simultaniously. Usually the proces is much easier to follow in LDD itself. If you have a choice, use the model in LDD instead of a generated HTML building guide.

There is also an Android App for viewing .lxf files: BricksViewer, a .lxf scene viewer (free).

The User Manual is also available as a PDF at lego.com

If you encounter any problems, refer to the Readme first. If needed, check the Eurobricks Forum in the Useful Links below. If the problem remains, post a question in our Help Forum.

The Import function in LDD has two different form of usage: adding and converting. If you want to add two or more models into a scene, you can't use Open, for that will clear the 3D work area before adding the new model. So after opening the first model, the only way to add a second model is to import it using Menu > File > Import > LXF-Files. The scene, now containing two models, can be saved as usual as a single .lxf file.

If you try to open an .lxf file created by an earlier version of LDD, you might get an error beep and some parts might not be displayed. In that case, try importing the model, which will perform the necessary changes.

The available export formats in Menu > File > Export are:

An .lxf file is a compressed .zip file that contains two other files: a .png image (the design preview, used to display the model in LDD's opening dialog) and a .lxfml text file, which describes the models or scene. LXFML stands for LEGO eXchange Format Markup Language, and it was developed in 2005 by LEGO System A/S. The latest version, 5.0 is used when exporting LXFML files, while LXFML4 uses the previous version 4.0. The LXFML files contain a textual description of a model or a scene in a highly structured and hierarchical format, known as XML. As these files can be opened by any text editor, they can be used to change, for example, the brick colors or camera position.

LDraw is not a single program, but a parts library based upon the LDraw file-format, and a collection of programs that can use that part-library in some way (see Virtual Building). By using a list that maps LEGO element ids (or LEGO part numbers) to LDraw part numbers, LDD can create an LDraw file that can be read by other programs. The translation table for this mapping is a file called ldraw.xml, in the LEGO Digital Designer folder (see Tips & Tricks).

A final export is available under Menu > File > Export BOM, which allows exporting a list of used parts in either an Office Open XML Workbook (.xls) or a ZIP-File. A similar list of parts (though much better looking) is added to the generated building guide (see Creating Instructions).

However, LDD can generate images similar to what is shown on the screen while building. There are two ways to create such images:

I have not been able to find any good general text tutorials on LEGO Digital Designer, because nowadays, tutorials are mostly done in video. Below you will find some links to video tutorials that provide a decent amount of good information. When it comes to specific problems with LDD, such as creating custom decorations, a little searching on the internet usually gets you an answer. Here are some of the special tutorials I found most interesting.

LEGO Digital Designer is a wonderful program. It looks great, it is easy to understand, intuitive to control, it has a massive amount of modern LEGO parts, lots of great features, and it fun to work with. It definately lives up to Ole Kirk Kristiansen's motto for the LEGO company, 'Det bedste er ikke for godt' (Only the best is good enough). The only problem is that LEGO has stopped developing it; they might be adding new bricks, but no more new features. I truly hope that LEGO will remember the Mindstorms introduction, and apply the lesson learned to the LDD software. LDD ought to be released as open-souce, and the fan community should be allowed to fork it and add new features, and add more parts to the LDD parts database.

In the Default theme, the building palette contains each available for each part. For some parts this means 50 of 60 different colors. In the Extended theme, the building palette is simplified , as each type of brick appears only once, in red. After adding the parts to the 2D work area, you can change the color to any color using the Paint tool, and you can use colors that are not available for the real part. There are also more parts available in Extended mode.

Note: Mac shortcuts can vary depending on your country.

Legos are classic childhood toys for many children around the world. The possibilities of what you can build with Legos are almost infinite. You're only limited by your imagination.
Lego Digital Designer lets you play with Legos - but these Legos are digital ones. Essentially, it's a 3D model editor that supports a wide range of Lego bricks.
To build a model in Lego Digital Designer, select the part you want to insert and place it in the work area. Use the arrow keys to rotate it. To remove a lego, select it and press the backspace key.
You can start a new model or modify an existing one, such as a tractor, a helicopter, an airplane, a tank, or a ship. You can even filter Lego blocks to find them more easily.
Requirements